Located at High Park just north of the Queensway, Grenadier Pond is a fishing hotspot in Toronto. If searching for something to do in Toronto fishing at Grenadier pond is a perfect location for children. Hundreds of bluegill and sunfish can be seen from the dock above the water. The pond itself gets as deep as fifteen feet and has great fishing all around the pond. It has a few different types of fish in the pond but is dominated by the abundant amount of sunfish. 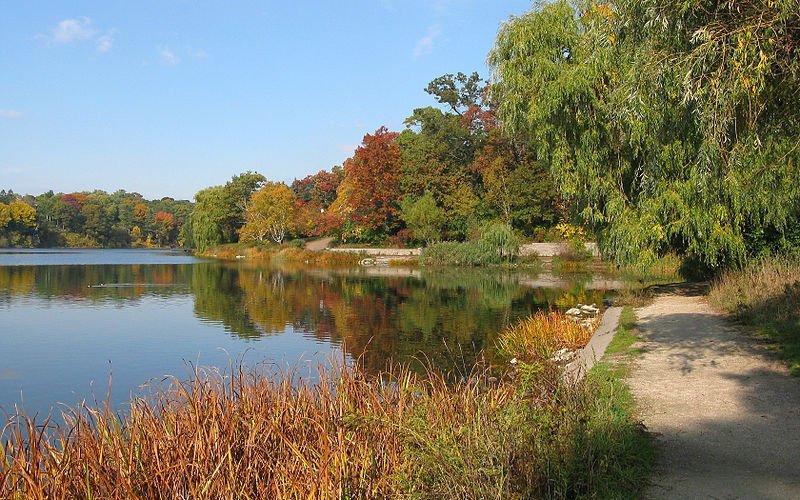 The number one fishing spot in Toronto for sunfish is in Grenadier pond. Huge schools of sunfish are everywhere in this pond. It is difficult to fish with a worm for crappies without catching a sunfish. There are few other predatory species in the pond which is why the population of these sunfish has gotten so high. Using a worm on a hook and dropping it in the water will catch one. Limited skill or patience is required for catching sunfish at Grenadier Pond, which makes it one of the best fishing spots for kids. Casting out with a bobber or float will also be efficient for kids as the exposure of the bait will be above ground and in better site. Pike are still in Grenadier Pond, but are very rare. They are also difficult to catch, not only because of their few numbers, but also because of the abundant amount of sunfish in the ecosystem it is like an all you can eat buffet for the pike. Anglers should cast out as close to the middle of the pond as possible and reel back keeping the lure just below the water surface. Anglers have most success using live or dead minnows, crank baits and spoons. If you catch a pike in this pond, snap a picture and be sure to release it back because there are so few left in Grenadier Pond. Bass are rare but still in the pond near the weedy shorelines. Smallmouth bass spawn near the southeast corner of the pond around the lily pads and weeds. Bass are only open in late June but be sure to check the seasons for bass fishing prior to casting. Use worms, spinners and artificial frogs and crayfish bait when targeting bass. When taking them off the hook, be careful and avoid keeping them out of the water for very long. Release them back into the pond as there are so few left. Grenadier Pond used to be a prime location for amazing perch fishing. However greedy anglers have caused the action to not be as active as it used to. Anglers often come to Grenadier Pond in search of schools of perch during Ice Fishing season. Using worms and artificial worms are the optimal baits to use when targeting perch. When casting from shore in the summer season bobbers and hooks can be used to keep the hook suspended in the water in better view of the perch.